www.classengroup.com
Menue
Gigantic growth: making two out of one 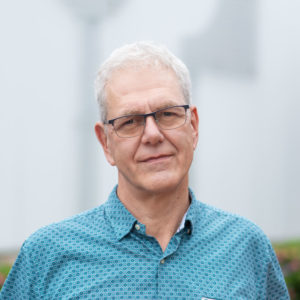 Setting up a new production facility at a different location is a challenging project. Not only logistically, but also for the employees themselves. When CLASSEN moved its laminate production from Kaisersesch to Baruth, I was up close and personal as one of the people responsible for production in Kaisersesch. I share a few of my memories in my blog post.

Ronald Ante is Head of the Application Technology Department of the CLASSEN Group at the Kaisersesch site and has been with the company since 1999.

When I joined CLASSEN in Kaisersesch in 1999, we were up to our ears in work to produce sufficient quantities of laminate to meet demand. We were bursting at the seams, we often had the problem that the warehouse was full. Laminate was piled up in every free space. Since 1995, CLASSEN had doubled its production capacity practically every two years.

CLASSEN was also very progressive in energy management even then, as the sawdust we produced in laminate production was burned and energy was generated from it. In the balance, so much energy was gained from it that the whole factory could be run on it. We used the heat for the machines and the electricity was fed into the grid.

We were also very advanced technologically. At that time, we developed a completely new, unique process: "Embossed in Register", the so-called synchronous pressing: the surface structure of the press plate was engraved synchronously with the decor paper and pressed in such a way that the tactile surface structure of the laminate plank matched the decor.

And then came the decision: We are opening a new factory in Baruth. Of course, we in Kaisersesch first had to be reassured. Many people were worried because they thought the Kaisersesch site would be closed. But the management already said at that time: No, we will continue in Kaisersesch. The idea from the beginning was to produce the large quantities of products in Baruth and to develop new technologies in Kaisersesch. The extent to which this would happen could not be foreseen at the time.

The new colleagues who would be responsible for production in Baruth joined us in Kaisersesch a year before the move to get to know our production and, in the meantime, set up the plans for the factory in Baruth. Completely new on the meadow, with brand new machines. Everything then worked like clockwork, there were no "catastrophes".

Ten years after the fall of the Wall, Baruth still had excellently qualified staff, trained in the GDR. In contrast to the West, these were not only men in technical professions at that time, but also women, who thus had a very good basis for quickly learning how to use the new machines. Together with the brand new machinery and a high level of personal commitment, Baruth was able to work independently very quickly, followed by gigantic growth. The fact that we had already doubled our capacity here in Kaisersesch every two years was continued in Baruth from 2002. First one machine was built, but the second one was already planned, and when the first one was not quite up and running, the second one was already there, then they doubled the whole plant with two more production lines and today they have eleven profiling lines and make 80 million square metres a year. That is gigantic, and this concentration at one location is unique in the world. Where we were able to provide support from Kaisersesch, we did so, but in the main, the colleagues in Baruth built it up on their own and very quickly stood on their own two feet, once again with a tremendous amount of personal commitment from many people.

At that time, I became what my colleagues called the "foreign minister" for Baruth. How it came about was actually quite a funny story. As more and more international clients came in and the American business started, the main question was: Who can speak English? In Brandenburg, English was not yet spoken as a foreign language. We also invited our American business partners to the opening in Baruth. The supporting programme included a visit to the Bundestag in the Reichstag in Berlin. There they just didn't have an English interpreter available that day and it was asked, "Who can translate?" And I said, "OK, I can help". Afterwards, our managing director came to me and said, "Listen, you've translated this really well, then you can also help with the American business". And so I became something like the interface in technical support between the colleagues in Baruth and the international customers.

Over the next few years, I witnessed the progress and the enormous growth in Baruth at first hand. Everything was getting faster, better and more beautiful. At some point we were told: We are building a second, separate plant for HDF boards in Baruth, on the other side of the road, exactly opposite the existing plant. At that time I could not imagine that this would become reality: two plants for HDF boards in Baruth, with gigantic machines, both working to capacity. But finally the construction work started and it worked exactly as planned. Today, Classen operates the largest continuous laminate plant in the world in Baruth.

As I said, at the time many people in Kaisersesch were not asking whether the plant would be closed, but only when. But the management kept its word: We still exist in Kaisersesch today, with hard-earned know-how in the production of our completely new polymer material CERAMIN. Today, Kaisersesch produces unique PVC-free and 100 percent recyclable floor coverings in the polymer sector. So today, looking back, I can say that I am proud to have been part of the development of two extraordinary sites: the gigantic laminate plant in Baruth and today's completely reoriented plant in Kaisersesch.

I benefit from the opportunity to work in a home office at CLASSEN in Kaisersesch. I describe in my post why this is so and what has changed in our company.

END_OF_DOCUMENT_TOKEN_TO_BE_REPLACED 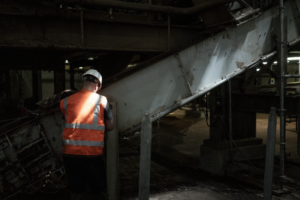 I have never seen a factory like this before!

Seven years ago, I came from East Westphalia to CLASSEN in Baruth, Brandenburg. I describe my impressions in my blog post.

END_OF_DOCUMENT_TOKEN_TO_BE_REPLACED 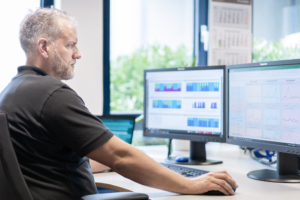 What we at CLASSEN do for the future of our children

How many tonnes of CO₂ emissions could we save at CLASSEN in 2020 and how did we do it? I will reveal it in my blog post.